Thank you for your patience while we retrieve your images.

525 photos
We did spend the first couple of days of our big road trip at the shanty. We even managed a quick trip out to the Rim with Donna and Bruce and of course the dogs. Yay for Winnie being much better and ready to go for a ride!

Here we go again! New Mexico and Texas are just routine, but we're going East to Memphis and Nashville! ( Most of the pics were taken through the dirty windshield). Spent a day driving across Arkansas, a first for us. It was very...... green. It was cool to finally cross the Mississippi River coming into Memphis. Guess what's in Memphis? Graceland! Our 4 night stay at the Graceland RV park should be fun. And...... It was fun! We spent all day touring the Graceland mansion and museum. There is a lot to see. But we found it to be a sad place. Poor Elvis. Died much too soon.

On in to Tennessee, which is very.....green. Not much different than Arkansas. Yawn. The Mississippi River and river walk in Memphis were pretty cool. We're pretty impressed by big rivers! (desert rats)
Then on to Nashville. We picked a crazy week. The CMA awards and CMA Fest were here, and who knew that the Nashville Predators were playing for the Stanley Cup? Also, there's a huge Woodstock wannabe music festival here for 4 days. It's a big deal, expecting 80,000 people. So our plan is to jump on the double decker tour bus and roam the city in the middle of all the insanity.

But first, a side trip to HIXSON TENNESSEE! Yes OUR Hixsons. It was pretty weird. All of the old historic HIXSON landmarks have been overrun by progress, mainly Chattanooga urban sprawl. We did find the old Hixson cemetery(s) and some of the ancestors, and not much else. But, Hixson High School's soccer team are State Champs! We bought some $5.00 t-shirts off the sale rack at the Walmart to celebrate. About all else we saw were a bunch of "Hixson" business signs. Oh well, been there done that. Glad that we went.

Back in Nashville, it was time to be tourists in "Music City". Love having Uber to get us to the heart of the city. From there, we took the Hop On Off bus. Much of the route was closed off due to the streets being closed downed for the street parties, but we did get a nice tour.

We did see the "American Picker" Nashville antique store. Pretty cool to see actual items for sale that we had recently seen on TV being purchased by Mike and Frank. They really do pick and then sell in their shops! Cool, but items are very expensive. We got our commemorative magnet as usual.

Our Nashville RV park had some live entertainment as well. Nice place, but we had to move on. Next stop, Unicoi Tennesse, or close to it. Our RV park was in Jonesborough on the Nolichucky River. Three nights at a beautiful campsite. David and Wes toured the tire plant that is going to be manufacturing "Sunstate" tires going forward.

Next, Virginia which is ......very green. (We are really missing the desert!) The terrain did finally start to change as we skirted the Great Smokey Mountains and other mountain ranges. We stopped near Staunton VA at the Walnut Hills RV park. Now THIS is an RV park! They really have a nice setup here. We're parked up on a hill in one of their "VIP" spots.

AND IT'S OUR 42ND WEDDING ANNIVERSARY!!! Time to celebrate.
© Alison Hixson Photography 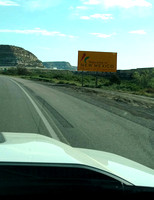